By Unknown - December 24, 2016
This is a six part series on worldviews by guest blogger Frank Allan.

The windows through which we interpret the meaning of our lives

The main difference between Christian Theism and Atheism is that the theist believes that there is a personal God that interacts with the world He created. God desires a relationship with His creation. He has followed an incredible plan to make it happen. The atheist, on the other hand, does not believe in God. He believes that all religion is myth. Matter and energy is all there is. Other worldviews may incorporated gods in their worldviews but they are all gods within the cosmos, not external to it. Many years ago, I sat in the audience as a person explained to a student group, at Carleton University, his search for truth. He had traveled around the world looking at and considering all the world religions and their truth claims. He had come back to Christianity because, in his words, “It is the only religion that describes a person, Jesus, who came from outside our reality, into our reality, to describe what reality is and then promised to take us out of our reality, to be with him in a better reality.” Only someone from outside our reality can be objective about it. We are always part of the world we observe. We are always at the centre of the world we see and the way we think. Only God, who is from beyond the cosmos, can rightly interpret the events in it, without bias. The philosopher, Ludwig Wittgenstein, captures this idea when he states, “the sense of the world must lie outside the world…. We feel that even when all possible scientific questions have been answered, the problems of life remain completely untouched.”

The two major worldviews of the West are Theism and Atheism (secularism, naturalism, or secular humanism are often used as synonyms to atheism).

Here is and elaboration of this comparison. 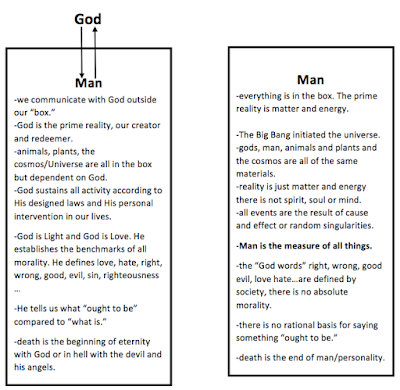 These two worldviews are in opposition to each other. They are symbolically represented by the two structures found at opposite ends of the Champs Elysees in Paris, France. One of them is a large open cube: almost 40 stories tall and 100 meters wide, covered in glass and white marble. Construction started in 1985 and was completed in 1989.  It is a modernistic art sculpture called La Grande Arche. It represents the modern, secular worldview of France’s current government, a worldview without God. The other structure is the famous Notre Dame Cathedral, one of the great Gothic cathedrals of Europe. Its construction was started in 1163 AD and was completed in 1345 AD. The cathedral was built during a time when God was considered the prime reality by those in power. God and the Bible were the benchmarks for morality but it was distorted by the teaching and behaviour of the Roman Catholic Church. As the cathedral can easily fit inside La Grande Arche, so too the religious heritage of France was swallowed up by the current secularism which has its roots in the French Revolution and the Enlightenment. The answers to the five basic questions of the Theistic and Atheistic worldview are compared below.