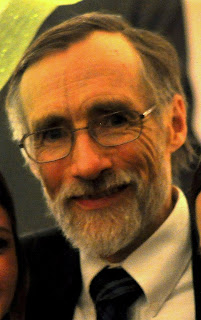 I will miss his smile with the sideways look and the twinkle in his eye, the tangible excitement in his voice with the description of his latest discovery, and the care and concern he had my wife and I. There is so much about a person and what they mean to you that it is hard to describe. How is it that when someone dies it seems like they are completely gone even though their body is still there? You would think it would be like they are sleeping, but it is not, there is something different. It is like looking for a friend who survived a car accident but only finding their crashed up car. Death is a mystery but it teaches us some important lessons.

Having the privilege to be with Harold in his last few days of life was an honor that I will not forget. Being with his kids and extended family singing with him in his hospital room brought a perspective that only comes in those types of situations. Though his body was getting weaker everyday, his spirit was getting stronger. It was like all of his doubts, questions, and difficulties of life were being left behind. Instead of increased anxiety about his inevitable fate, he seemed to finally be at peace. The source of his strength and confidence was unmistakable and was captured with a simple gesture of pointing to the sky. After a life of seeking to know God he was finally ready to be with Him. He was ready to go home.

Life is like driving with a flashlight down a dark tunnel covered in mirrors. Using the flashlight you can catch glimpses of yourself and what you are truly like, but it is not until you approach the light of death at the end of the tunnel, and about to be thrown clear from your car, that you finally see yourself for who you really are and what you truly believe. In this light there is no more need to pretend you are somebody you are not or to lie to yourself and others about what is important in life or what you believe. But, it was in this moment of truth that Harold did not waiver in his faith in Jesus Christ but took hold of it like he had never done before. This was an encouragement and confirmation that faith in Jesus Christ stands the litmus test of life, which is death.

As my wife and I left his hospital room for what would be the last time we said to him, "we will see you again", and he said, with unwavering confidence, "in the morning. " He was not referring to the next day, but to the day when we would be together and in the presence of the one who gave His life up so we could conquer death. These words cannot be said by people who doubt or do not believe in life after death. They can only be said by people who are confident that they will indeed pass from death to life. It is this confidence that allows him and us to say with confidence, "Death is swallowed up in victory. O death, where is your victory? O death, where is your sting?"