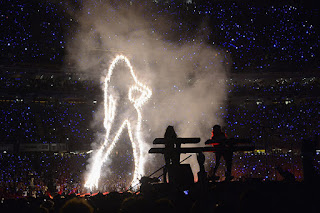 Suddenly flames shot up and the thirty foot figure of a seductive women was outlined in fire. The crowd roared in anticipation of the sexual performance that was to come. Men felt the oncoming rush of  intoxication while women felt the tangible surge power of being a women at the tips of their fingers. We may not worship at the altar of Venus in ancient Rome, but Venus worship is alive and well.

The first thought that came to mind when I saw the fiery image of Beyonce was that we now worship women. The incongruity of the moment struck me like it never had before. Why is a performance that would be inappropriate in private be appropriate in public? If Beyonce came to my house and performed her half time show for me, it would be clearly inappropriate, unless we were married. Why does having a 100,000+ people there make it appropriate?  It does not, but worship brings things that are private into the public sphere since it is a shared object of desire.

A woman is pinned against the wall by the firm grip of man and suddenly the woman reverses the situation and ferociously pins the man against the wall. This was just one example in the numerous movies that have come out recently depicting men and women fighting in hand to hand combat. It is true that some women could do that to some men but it is not common. It is a fact that men have more upper body strength, so why the need to portray something that is not reality? Men and women are different. There is no need for them to be equal in everything but that does not mean they are of lesser value.  Trying to prove that women are just as capable as men physically is simply a thinly veiled attempt to prove that women are better than men. Women are not better than men, they are just different.

"Any woman of mine better walk the line." This is a reprehensible statement in today's society but by just changing one word it becomes perfectly fine. "Any man of mine better walk the line - Shania Twain." Why is it okay for women to talk like this but it is not okay for men to talk like this? There is clearly a double standard. Most cultures understand that it is not acceptable to profane things that are sacred. Similarly, it is fine to make fun of men because they are not sacred. It is the women we worship and therefore nothing even seemingly negative can be said.

It is a women's right to decide if she wants an abortion, after all it is her body. However, life is not that simple. Men and women are interdependent. There would be no men if there were no women. There would be no women if there were no men. If having sex is consensual then why is having a baby not? After all you can't have a baby unless you have sex!  If all men decided to get "fixed" and could no longer produce children, would that decision be in their authority to make? No, since both men and women are interdependent.  This really would not be a problem at all if we all remembered the consequences of sex before having it.

The truth of the matter is that men and women are equal but have different strengths and weaknesses. Making women the object of our worship is not honouring to them, rather it removes their dignity. When their body is exposed publicly it removes the mystery and sacredness for that which it was intended. When their strength is portrayed as a brute physical strength it takes away from their internal resolve that has enabled them to thrive through many generations. When men are degraded and women are praised it takes away from the interdependence between men and women which is required for a stable society.

We will become what we worship.